With 2021 coming to a close, what better time to reflect on the advances in consumer electronics over the last year. This industry is rapidly changing and its growth in 2021 was no exception.

Garmin announced their new GMR Fantom 18x/24x Radars featuring black radomes for a sleek, sophisticated look. These radars offer a higher power output than the Fantom 18/24 radars at 50W as opposed to 40W.

Icom released the Icom M94D Handheld VHF Radio- the world’s first handheld VHF to offer both internal GPS and an AIS receiver. This radio features 6W power output, up to 10 hours of battery life and floats!  The Icom M94D has been a top seller this year and has received outstanding customer reviews.

In regards to automotive electronics, Garmin released a new series of dash cams including the very popular Dash Cam 67W with a 180-degree field of view and high resolution. Live View Monitoring with the Garmin Drive App also allows users to monitor their vehicle remotely- an exciting new feature for Garmin!

This year has been exciting for our team here at The GPS Store, Inc. as well. Our very own Ashley Howard and Noelle Cruikshank were featured in Boating Magazine’s Women in the Marine Industry series. We are proud of their contribution to the industry.

We are pleased to announce that our team grew this year with the addition of Parker and Tim. Parker joined our warehouse team early this year and Tim joined our sales team later in the year. We are very pleased to have them as part of the team!

We also expanded our free, fast shipping to offer free 2-day shipping and free 1-day shipping on the vast majority of our products. Paired with our same day shipping, our delivery times are faster than ever before.

We are looking forward to 2022 and hope you are too! From the whole The GPS Store, Inc. team- We wish you a Happy New Year!

Merry Christmas from your friends at The GPS Store, Inc. We hope you have the opportunity to spend time with family and friends. 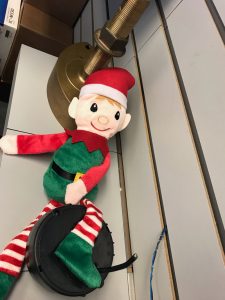 Christmas is less than 2 weeks away and there is still time left to get great deals on gift worthy electronics! We know it’s important that your package makes it under the tree in time for Christmas, so we have created a handy Holiday Shipping Guide linked below. Also check out the handy delivery calendar below. 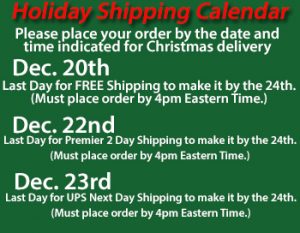 The GPS Store, Inc. has been your source for expert advice on marine, Outdoor and Automotive electronics since 1997. Our expert sales staff is standing by to help you make the best selection for your specific needs. As electronics evolve and advance, so does our specialized knowledge.  Give us a call Monday-Friday 9am-5pm Eastern at 1-800-477-2611.

The countdown has begun! The Christmas holiday is less than 3 weeks away and our warehouse team is busy packing and shipping orders for arrival in time for the holidays. We know this time of the year can be stressful and we want you to know that we are working closely with our shipping partners during this peak season.

There’s still time to receive new, in stock orders by Christmas, with time to spare. We offer free expedited shipping on a large portion of our product selection and low cost expedited shipping for other items. We have a vast assortment of marine, outdoor and automotive holiday specials that are both in stock and at their lowest price of the year making them ideal for gift giving.

Our sales team has curated our annual gift guide to help anyone stumped with gift ideas. Sort this guide easily by Adventurer, Boater, Traveler and Wearable gift ideas!

The holidays bring people together, as do the products we offer. A new fishfinder may allow for time on the water with grandkids, a hiking GPS may encourage family camping trips, or a new running watch may bring together others that enjoy your sport of choice. No matter how the gear is used, we hope it helps bring you together with loved ones.

As always, our experienced sales team is here to help you!